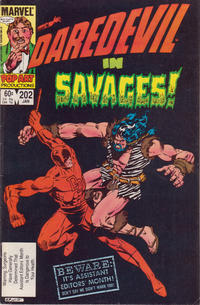 A colorist's mistake turns a police officer in the story from white to black on story page 9. Error pointed out and corrected on the letters page in Daredevil #206.

A Life in the Day (Table of Contents: 4)

Genre
humor; superhero
Characters
Daredevil [Matt Murdock]; Turk (villain)
Synopsis
A young schoolboy does an in-depth oral report on "Daringdevil," which is interrupted by a fight between Daredevil and Turk.

The illustrations used to illustrate the boy's "Daringdevil" talk were drawn by Mike Carlin, according to the letter column in Daredevil #206.