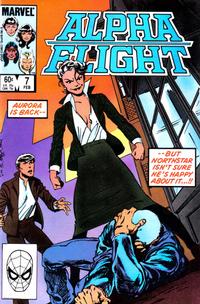 The Importance of Being Deadly (Table of Contents: 1)

First Line of Dialogue or Text
My thanks to you, Doctor Bosson.
Genre
superhero
Characters
Alpha Flight [Aurora; Northstar]; Dr. Bosson; Raymonde Belmonde (death); Danielle Belmonde; Deadly Ernest [Ernest St. Ives] (introduction); Alec Thorne; Delphine Courtney (introduction); Meg
Synopsis
Northstar takes Aurora to a psychologist to see what can be done about her having two separate personas. He then takes her to see a good friend of his, Raymonde Belmonde. There they find out that the restaurant is being blackmailed by local crime lord Deadly Ernest. When Ernest's thugs barge in, Ernest kills Belmonde with a touch and kidnaps Aurora. Northstar does not dare reveal his powers before Belmonde's daughter Danielle, but swears revenge. Meanwhile, Delphine Courtney invites Alec Thorne to join her and her employer in a new project.
Reprints

The title is a play on The Importance of Being Earnest (Oscar Wilde, 1895). The adjective is used as a pun as it is interchanged with the name ‘Ernest,’ given to the antagonist in this issue.

John Byrne had to misread the spelling of ‘Raymond’ phonetically. Unlike French, the English pronunciation uttering the ‘d,’ [/de/] and Byrne indeed anxious to respect the use of French for his Quebecker characters, he added an ‘e’ at the end of Raymond, feminizing by mistake the first name.

Let A Child Be Born (Table of Contents: 2)

Genre
superhero
Characters
Professor David Camperton; Doctor Efford; Richard Lawrence Easton; Ruth; Nelvanna; Hodiak; Lars; Carmichael; Snowbird (unnamed, origin); Shaman [Michael Twoyoungmen]
Synopsis
At an archeological dig in the Arctic Circle, an ancient headband is discovered. At night, it beckons to its finder and puts him in contact with two gods, who ask him to give up his "seed of humanity". Accepting, the man finds himself returned to earth fifteen years later. A year later, Shaman feels himself summoned to the site, where the goddess Nelvanna reveals herself to him, pregnant. Shaman performs the role of midwife to the goddess and a young infant is entrusted to his care.
Reprints

Although it is clearly a separate story, with separate story title and cast, this story continues the page numbering of the main Alpha Flight story.