While a commonly available but blurry scan makes this issue appear to be numbered v1#1, Frank Motler has confirmed from his physical copy that the correct number is v3#1, and also supplied the Statement of Ownership transcription. 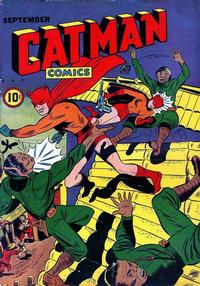 The Catman and the Kitten / comic story / 8 pages (report information)

First Line of Dialogue or Text
What queer quirk of fate makes criminals of law abiding people?
Genre
superhero
Characters
The Catman [David Merryweather]; The Kitten [Katie Conn]; Tony Berko (villain); Berko's mob (villains)
Synopsis
When a 30-year-old paperboy becomes disgusted of being called "my boy" by people, he decides to get revenge on anyone who dares call him that. So he gathers a group of eight newsboys together to work for him, exacting that revenge and getting rich in the process. But David and Katie have a run-in with one of the boys and learn where this Berko resides. From there, The Catman and Kitten take over.
Reprints
Keywords
Centre City Courier

The Man Who was Death (Table of Contents: 2)

Only appearance of Leatherface, set in 16th century France.

[Statement of Ownership] (Table of Contents: 4)

Full data provided (courtesy of Frank Motler, April 28, 2005) as the print is exceedingly small in the original, and not easily legible even in the higher-resolution of the two available scans:

You're the Murderer! (Table of Contents: 5)

First Line of Dialogue or Text
Folks! We want you to meet our newest addition to Cat-Man Comics...Rufus!

The Tokyo Termites (Table of Contents: 7)

The Man Who Sold His Soul to the Devil! (Table of Contents: 9)

Genre
superhero
Characters
The Hood [Major Wood]; Rae Herman (his fiancée); Satan (the Man in the Black Cloak, villain); Harvey Stone (villain, death)
Synopsis
The Hood has to face Harvey Stone, a man who sells his soul to the Devil for ten good years, a man who now has the luck of the Devil, and whose every venture is crowned with success and unspeakable evil.
Reprints