On sale date taken from stamp on comic book currently in the image archive.

Cataloged from a scan at Digital Comics Museum. 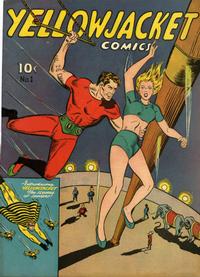 First Line of Dialogue or Text
All things have a beginning --
Genre
superhero
Characters
Yellowjacket [Vince Harley] (introduction; origin); Judy Graves; Jake Mallon (gang boss)
Synopsis
A gang of crooks chasing a girl, enter the house of Vince Harley, crime fiction writer and beekeeper. The girl slips away and the gang decide to finish Vince off by dumping a hive full of yellowjacket bees inside his house. He is immune to bee stings, can even control them, and gets the idea of how to fight the gang in a yellowjacket outfit.
Reprints

The crude figures and faces are similar to Battefield's credited stories in this series.

First Line of Dialogue or Text
Mount Olympus -- the hall of the gods...
Genre
fantasy-supernatural; superhero
Characters
Diana the Huntress (introduction); Hercules; Jupiter; Mercury; Discordia
Synopsis
On Mount Olympus, Zeus decides to let the gods come to the aid of the Allies in their fight against Japan and Germany. Diana is to help them in Greece.

The art here is similar to Schrotter's signed story in Heroic Comics (Eastern, 1943 series) #38. He has some special scrolls in the ears.

Message for the Cops (Table of Contents: 3)

The Black Cat (Table of Contents: 4)

First Line of Dialogue or Text
Danny King -- the King of the Beasts -- finds he must seize his whip from the hand of death!
Genre
adventure
Characters
Danny King (introduction); Russo; Lucy Flair; Whip Chandler
Synopsis
A lion tamer is fired for being drunk, and Danny King gets his chance to handle the big cats and the vengeful ex-lion tamer.

DeLay can be recognized by the "slow" movement of the rather short figures. Also faces and the layout style more like old book illustrations.

The Man Who Should Have Died (Table of Contents: 7)

Genre
war
Characters
Jack
Synopsis
A sailor is taken captive aboard a Nazi u-boat and lives to tell his story.

First Line of Dialogue or Text
Peril strikes at the Phillipines from Japan --
Genre
war
Characters
Juan Manito [Filipino Kid]; Felipe
Synopsis
The Japanese march into Manila, and Juan takes up the fight against them.

Art was previously attributed to Gerald Altman, but the way the eyes, teeth, and ears are drawn more closely resembles those of Chu’s in his Green Turtle art from Blazing Comics (1944-1945). Some of the lettering on the torii on the splash page also matches the lettering on his signed Late Summer painting from 1934: http://chimericaneyes.blogspot.com/2014/01/about-artist-chu-f-hing.html