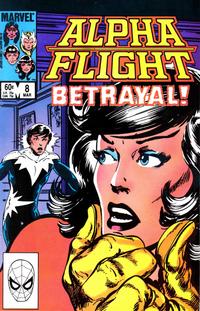 First Line of Dialogue or Text
There it is!
Genre
superhero
Characters
Snowbird [Narya] (origin); Shaman (origin); James MacDonald Hudson; Heather Hudson
Synopsis
Shaman is contacted by James and Heather. They want him and Snowbird to come work for Department H.
Reprints

The real name of Snowbird, ‘Narya,’ is revealed in this episode of The Origins of Alpha Flight. Snowbird appears for the first time in X-Men #120, April 1979, under the identity and form of ‘Anne McKenzie.’ This alias will later prove to be her human aspect one for, although not explicitly, her goddess nature is referred to the first time in X-Men #140, December 1980. As the episodes of Alpha Flight go, her human pseudonym ‘Anne McKenzie’ will be less utilized, in favor of Narya.