On sale date from the publication date and volume number found at the Catalog of Copyright Entries, Part 2, Periodicals, New Series, Volume 34, 1939, Number 1. Class B periodical. Copyright number B 405349.

Art is an homage to N.C. Wyeth's illustration "The Battle at Glen Falls" for the book "Last of the Mohicans" (1919 edition). 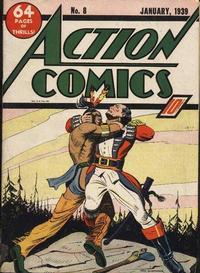 [Superman in the Slums] (Table of Contents: 2)

First Line of Dialogue or Text
Leaping over towering buildings...
Genre
superhero
Characters
Superman [Clark Kent]; Frankie Marello; Box-Ears; Nick; Pinky; Gimpy (villain)
Synopsis
Superman decides to get involved in a case involving wayward boys being used by a petty criminal, who uses the boys to steal items from wealthy people that he can sell for quick cash...all at their expense.
Reprints

Wears red boots, "S" symbol is all yellow, but is missing in a number of panels. Uses super-hearing for the first time. Synopsis added by Craig Delich.

By comparison with signed story in Marvel Mystery #3, much of the inking here is by Lauretta.

First Line of Dialogue or Text
Pop said that you can't stay in the house...
Genre
humor
Characters
Butch (a dog)

[Philately on Wheels] (Table of Contents: 14)

Sequence added by Barry Sandoval through an error report.

[The Marijuana Farmers] (Table of Contents: 15)

First Line of Dialogue or Text
What's the idea of us comin' out here...
Genre
adventure
Characters
Scoop Scanlon; Rusty; Bill Malone (G-Man); Hank (G-Man); Nick Williams (villain); "Campy" (villain); unnamed gang members (villains, many die)
Synopsis
Scoop and Rusty head out into the country on a tip from Scoop's G-Man friend, Bill Malone. When the tire of their car is shot out, then the car riddled with rifle bullets, Scoop and Rusty find themselves soon bound inside a cabin which has been set afire.

The Indian Prince (Table of Contents: 16)

On the inside back cover. Black and white, with tones.