There is no letter column in this issue. On-sale date from Amazing Heroes #38, with newsstand on-sale date of 1984-01-17.
This issue has variants: 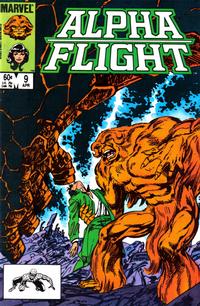 Things Aren't Always What They Seem (Table of Contents: 1)

First Line of Dialogue or Text
Near the peak of Canada's tallest mountain...
Genre
superhero
Characters
Sasquatch [Dr. Walter Langkowski]; Kortgaard (death); Colonel McMurdo (death); Megan Masterson (death); Greene (death); Doctor Duncan (death); Super-Skrull [also as The Thing]
Synopsis
In an isolated research station, Dr. Langkowski is invited to study an odd cosmic radioactivity phenomenon. When the scientist locks in, the Fantastic Four's the Thing is "beamed in", forcing Langkowski to reveal his secret identity to the others. Then the other scientists are killed off and the strange visitor turns out to be someone else altogether.
Reprints

Special thanks to Jim Scott, fellow Canadian, for suggesting this confrontation.

A Stranger In My Mirror (Table of Contents: 2)

First Line of Dialogue or Text
She had found this special place quite by accident...
Genre
superhero
Characters
Aurora [Jeanne-Marie Beaubier] (origin); Soeur Anne; Father Tyrel; Wolverine [Logan]
Synopsis
The young Jeanne-Marie Beaubier grows up in an orphanage and develops her powers and her dual personality. When she runs across some thugs, she deals with them easily, much to the amusement of the passing Wolverine, who suggests she contact James MacDonald Hudson.
Reprints