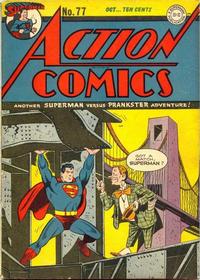 The Headline Hoax! (Table of Contents: 3)

Genre
superhero
Characters
Superman [Clark Kent]; Perry White; Lois Lane; Amos Amster; Thomas Todd; Joe; Prankster
Synopsis
The Prankster disguises himself as a blind news dealer and manufactures Daily Planet headlines to con certain people so that he can make a profit off of them!
Reprints

Oddity: in the last panel of page 10, Prankster is reading a copy of "The Daily Star" (the first newspaper Clark Kent worked for).

The Punctured Picture! (Table of Contents: 5)

First Line of Dialogue or Text
That must have been put there to keep the kids off!
Genre
humor
Characters
Clancy

The Leaping Leopard! (Table of Contents: 11)