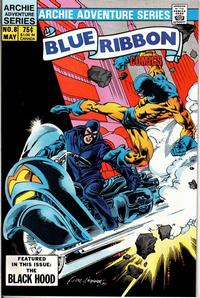 Genre
superhero
Characters
Black Hood [Kip Burland]; Uncle Matt [the Black Hood from the West]; Damian Doyle (Kip's weapons outfitter and electronics expert); Faye Traynor
Synopsis
While trying to fight corruption in his city, Kip Burland visits his uncle and is told about a secret tradition in the Burland family that may help Kip in his battles. Later that week, a mysterious hooded motorcyclist rescues the kidnapped daughter of one of Kip's witnesses.
Reprints

It's Murder to Beat the Odds (Table of Contents: 2)

These Black Hood stories were originally intended for publication in a new Black Hood #1 in the early-to-mid 70s.

Life's Not Like a Comic Book (Table of Contents: 4)

Genre
superhero
Characters
Black Hood [Kip Burland]; Rhonda Lee; Debbie Wiachek (dies in this story)
Synopsis
When Kip fails to stop a kidnapping in broad daylight, the Black Hoods comes out to find the kidnappers and save their victim.
Reprints

Appears between pages 5 and 6 of the previous sequence.