Both the Cyclops and Kitty Pryde covers have the same UPC number.
This issue has variants: 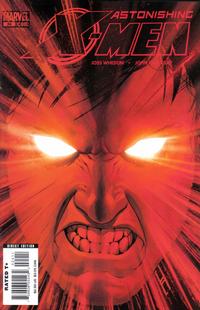 Powerlord Kruun; Sylatin; Ord; Aghanne; Danger
Synopsis
The team meets up with Cyclops. Shadowcat, Beast and Agent Brand go to stop the missile. Cyclops, Emma, Colossus and Aghanne take Powerlord Kruun to the power core where Colossus can threaten to blow up the Breakworld if Kruun does not call off the missile, not knowing it is set to fire no matter what Kruun does. The rest of S.W.O.R.D. provides covering fire. Ord gets through the soldiers, and tackles Aghanne. Cyclops orders Colossus into the power source. Aghanne, wearing a protective suit, meets Colossus there and he realizes it was her intent that he destroy the Breakworld all along. On the surface of the space station, Beast and Shadowcat can't figure out how the missile is controlled. Shadowcat phases into it despite the trouble she has with the metal alloy. More than a mile in she finds a hollow space at the tip, but not controls. As the "missile" fires they see that it has no thrusters- it is not a missile, but a bullet headed straight for Earth with Shadowcat inside.
Reprints