Original indexer credited pencils and inks to "Bud Thompson ?", but Thompson did not join Fawcett until 1945.
Mac Raboy was not working at Fawcett when this comic came out, but the Captain Marvel, Jr. figure is a paste-up by him. The remainder of the artwork on cover was done by an unknown artist at this time. 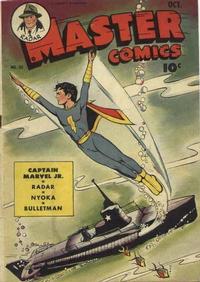 The Unrelated Triplets (Table of Contents: 2)

The Tattooed Man (Table of Contents: 3)

The Python Peril (Table of Contents: 4)