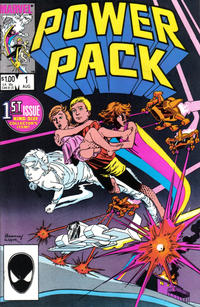 First Line of Dialogue or Text
Snark fighters -- and a starcruiser!
Genre
superhero
Characters
Power Pack [Gee [Alex Power]; Lightspeed [Julie Power]; Energizer [Katie Power]; Mass-Master [Jack Power]](introduction and origin); Dr. Jim Power (introduction); Margaret "Maggie" Power (introduction); Whitey [Aelfyre Whitemane] (introduction and death); Smartship Friday (introduction); Snarks (introduction); Zwirk
Synopsis
An alien discovers that an earthling is about to discover a new form of technology that could destroy Earth. En route to Earth, the Kymellian called 'Whitey' is attacked by the evil aliens he calls Snarks. His smartship Friday crashes near the home of the Power family and is found by the four young Power children. To save them from the Snarks, Whitey bestows superpowers upon the children.
Reprints

The Power Behind the Pack (Table of Contents: 2)