Plastic Man Gets Knocked for a Loop! (Table of Contents) 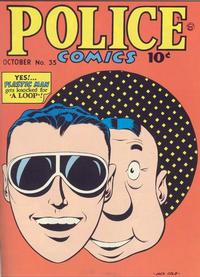 [The Confession of Froggy Fink] (Table of Contents: 1)

Can Destiny Be Trapped? (Table of Contents: 3)

Genre
detective-mystery; superhero
Characters
Destiny; Tools (villain, mob boss)
Synopsis
When criminals began to discover the modus operandi of Destiny, mob boss Tools threatens to kill one of his own men, and, sure enough, Destiny walks into a trap. But the ambush fails and the crooks are quickly mopped up.

Genre
superhero
Characters
The Human Bomb [Roy Lincoln]; Hustace Throckmorton; Lucille
Synopsis
Roy meets a pretty young inventor, who has invented a robot that looks just like the Human Bomb. However, once Roy destroys the robot, she wants nothing more to do with him.

Writer credit revised from Paul Gustavson to ? by Craig Delich 2013-4-5. Jim Amash, in the Quality Companion, verifies that Gustavson wrote this feature through Police #22, then picked up again with #37. The intervening writer is unknown for this story.

Paul's son, Terry, said that he never saw any of his Dad's work leave his Dad's studio that he had not penciled, inked and lettered. Letterer credit added by Craig Delich.