On-sale date from Amazing Heroes #52.
This issue has variants: 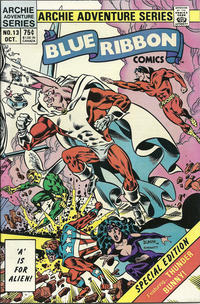 A brief introduction by Lori Wells, which mentions that Rich Buckler is no longer the editor. Includes letters and a preview of the next issue's cover. Located on the inside front cover.

A Is For Alien, B Is For Boston, C Is For Crusaders (Table of Contents: 2)

Genre
anthropomorphic-funny animals; superhero
Characters
Thunder Bunny [Bobby Caswell]; Gloria (a comic book shop owner); Mighty Crusaders [Fly; Fly Girl; Shield; Jaguar; Web; Darkling]; Massachusetts governor Michael Dukakis; Al (Bobby's uncle); Luta (an alien businessman); Natalie (a TV reporter); Gary (Bobby's friend)
Synopsis
Bobby catches a cold when he goes to get his new comics from a local store. Then, aliens invade Boston and the governor calls for the Crusaders to help. Eager to join his heroes, Bobby changes into Thunder Bunny, but his head cold makes him unintelligible. The Crusaders see him and mistake him for one of the aliens.

With the Mighty Crusaders and Massachusetts governor Michael Dukakis. Thunder Bunny also had a one-shot appearance in Pep #393. Story continues in Thunderbunny (WaRP Graphics, 1985 series) #1. On page three, a kid is seen reading a Thunder Bunny issue with Doctor Fog on the cover. Despite the Red Circle logo on its cover, Doctor Fog did not appear until Thunderbunny (WaRP Graphics, 1985 series) #2.