[The Ski Murder] (Table of Contents) 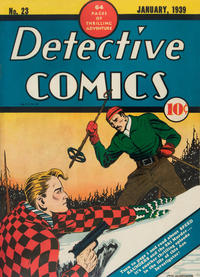 The Ski Murder (Table of Contents: 2)

Here's a Knockout Gift for Christmas (Table of Contents: 4) (Expand) /

[The Corpse in the Car Trunk] (Table of Contents: 5)

Nuggets of Lead (Table of Contents: 6)

story in black, white, and red

[The Zombie Killers] (Table of Contents: 7)

First Line of Dialogue or Text
In the offices of the Union Leader...
Genre
superhero
Characters
The Crimson Avenger; "The Boss" (villain, introduction); his zombies (introduction); Red Nelson; Little Joe; Linda Perry
Synopsis
The Boss uses zombies to try to wipe out his underworld rivals.
Reprints

Not on Bails' list of Fox stories. Does not resemble writing in Speed Saunders story at all.

[The Celebrity Deaths] (Table of Contents: 11)

First Line of Dialogue or Text
Could I interest you in a lifetime subscription?
Genre
humor
Reprints

The balance of this page is taken up by the Statement of Ownership.

[The Many Murder Attempts of McQuade] (Table of Contents: 16)

First Line of Dialogue or Text
A lone figure walks down a quiet street at night...
Genre
adventure; crime; detective-mystery
Characters
Cosmo; McQuade (introduction, villain); Leroy
Synopsis
A man rings Cosmo's door in the middle of the night and claims someone wants to murder him. So Cosmo takes his place.
Reprints

First Line of Dialogue or Text
In the course of one of their routine cases...
Genre
adventure; detective-mystery
Characters
Slam Bradley; Shorty Morgan; Prof. Kenton (introduction); bird-man; plant-man; flower-man
Synopsis
Professor Kenton tells Slam and Shorty about the fourth dimension and then takes them for a visit to the year 2,000,000,000 A.D. in his time-flier.
Reprints

For the first time, Wayne Boring (who may have ghosted the strip previously) is evident on inks.