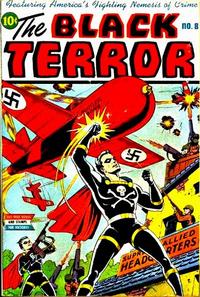 Illustrated advertisement from the Juel Company in Chicago for a product they called the Julene Sytem, which prevents split ends in ladie's hair from breaking off. Cost is $1, money-back guarantee. Coupon provided.

Job Number
CC-175
First Line of Dialogue or Text
A murderous plot against America's war wounded...
Genre
superhero
Characters
The Black Terror [Bob Benton]; Tim [Tim Roland]; Jean Starr; un-named FBI agents; a dictatorial phony Chief of Police (villain, a crime boss); crime gang (villains, some die)
Synopsis
Bob is given the task of accompanying a shipment of penicillin to the west coast, which is to be used on our wounded soldiers. While his train is going through a tunnel, the car carrying the drug and its caboose mysteriously disappear!
Keywords
Benton Drug Store

Genre
adventure; jungle
Characters
Bobby Thomas; Jim Thomas (Bobby's brother); Simba (native boy); Genertal Martin; a spy (villain)
Synopsis
Bobby and his brother Jim are in Africa doing special secret war work for the U.S. Government and hear of a dangerous black-striped and tan tiger on the loose. As it turns out, the tiger was a spy in disguise trying to secure information about their mission.

Genre
adventure
Characters
Sammy Lake (10-year old son of the Fire Chief); two Policemen; Joe Brown (villain)
Synopsis
Sammy is home alone when a knock at the door reveals a tough-looking guy who barges his way in and seeks out the family jewels and money. A length of rope is the undoing of the would-be burglar.
Keywords
Engine Company No. 64; New York; Riverside Drive

Genre
western-frontier
Characters
Danny Hill; Tom Grant (Circle H foreman); masked man (villain)
Synopsis
Danny is riding through the hills when he spots a masked man lying in wait, not doubt for the Circle H foreman who went to town to get the latest payroll.
Keywords
Circle H Ranch

First Line of Dialogue or Text
Invisibility pills provide a weapon...
Genre
adventure; crime
Characters
Hale (reporter); Vivkie (reporter); newspaper editor; Herr Wilhelms (villains); German bandits (villains)
Synopsis
Vickie is invited by the Women Volunteers to ride in the lead truck of a parade honoring the Great Salvage Scrap Drive. Durinbg the procession, armed German bandits take over the truck and drive it to an outlying area and dump the contents....all to demoralize Americans. Hale takes an invisibility pill and follows the gang to their HQ and deals with them there.
Keywords
invisibility pill

Learn Radio by Practicing in Spare Time (Table of Contents: 9)

Found on the inside back cover.

Here's the Greatest Billfold Bargain in all America! (Table of Contents: 10)

Illustrated advertisement from the Illinois Merchandise Mart for an amazing Smart Leather Billfold for $1.98, which features a 3-color identification plate, with emblems and person's name embossed on the exterior in 23 karat gold.