This issue had a different cover and first story than what had been originally solicited (the solicited cover and story ended up in Superman #670). This change was announced by a press release on 2007-09-18.

There is an inscription "TO NEAL ADAMS AND H.P.", the cover is an homage to Superman (DC, 1939 series) #233 by Adams and referring to H.P. Lovecraft's Cthulhu. 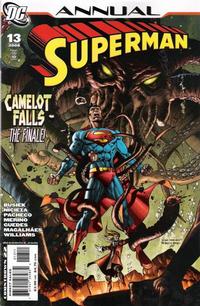 The Fall (Table of Contents: 1)

Genre
superhero
Characters
Superman [Clark Kent; Kal-El]; Arion [of Atlantis]; Phantom Stranger; Arion [Bill Knightly]; Jimmy Olsen (cameo); Lois Lane (cameo); Perry White (cameo); Young Gods [Turrek; Sarka]; Lana Lang; Bette (cameo); Squad K [including Colonel Perseus T. Hazard]; Prankster (balloon); Chris Kent [Lor-Zod] (cameo); Khyber; Ghostwolves (future)
Synopsis
Superman talks to the Phantom Stranger about the future, and is given a gift to help in the coming battle. Superman battles Arion, who is using the kidnapped Young Gods as part of his transformed army. Using Phantom Stranger's gift of a shield against magical attacks, he strips Arion of his amulets and defeats him. Arion flees back in time, leaving the other Arion behind disguised as himself. Lana's use of the Scancams helps Lexcorp's financial problems. Khyber comes back to life after being defeated by Sirocco two years ago.
Reprints

Story continued from Superman (DC, 2006 series) #667. In promotional materials, this is called part 2 of the 2-part finale of "Camelot Falls", and was originally scheduled for Superman #668. In the panel where Superman stops the tidal wave (page 17), Carlos added "TO ROSS AND TERRY" on the panel border. On Geoff Johns' message board on 2007-12-01, some fans mention (and Kurt confirms) that that is a reference to Ross Andru and Terry Austin's work on the first Superman vs. Spider-Man crossover, which had a similar scene. On the DC Message Boards on 2007-10-02 and the next day, Kurt talks about the art, saying that Merino is sharing the pencils with Pacheco, and "doing quite a bit more than layouts, but not full pencils."

The Best Day (Table of Contents: 3)

Terabithia is likely a reference to the "Bridge to Terabithia" book/movies, but could also be a reference to an island in "Prince Caspian" and "The Voyage of the Dawn Treader" by C. S. Lewis called Terebinthia. Per Kurt (in a question and answer session on Superman Homepage on 2007-12-04), the reference to Kara being from Kandor is a mistake; it should be Argo.