The Banshee of Dead Man's Hill (Table of Contents) 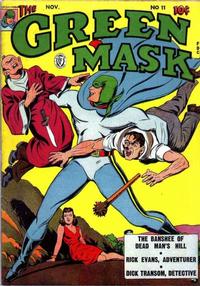 Genre
superhero
Characters
Green Mask; Johnny Green; Gail; Danny; Karl; Otto; John; Dr. Baum; Mike
Synopsis
High school students Johnny, Gail and Danny decide to explore the "haunted" Banshee Cave. A group of saboteurs is using the cave as a hideout. One of the men is injured and their leader, Dr. Baum, decides to use Gail for a blood tranfusion. Johnny, angered, becomes the Green Mask. The Green Mask eventually defeats all of the saboteurs and kills Dr. Baum.

It is never stated that the saboteurs are Nazis, but their names (Karl, Otto, Dr. Baum) suggest this is the case.

First Line of Dialogue or Text
All set for another adventure with Pussy Katnip, proprietress of the best cafe...
Genre
anthropomorphic-funny animals
Characters
Pussy Katnip; Willie the Weasel; George; Monk; Race-Track Hutch
Synopsis
Pussy Katnip hires Willie the Weasel to dance in her cafe. However, she discovers he is tapping out the combination to her safe so his accomplice Race-Track Hutch can rob her. Pussy, aided by a sip of her Katnip Fuzz, captures the crooks.

Len Short is a house byline used on this feature.

Hap Harris is a house byline used on this feature.

Tentative art ID by comparing this to the previous issue's Dick Transom story which was identified by the JVJ index card attached to the online scanned version.

The Road to Happiness (Table of Contents: 4)

First Line of Dialogue or Text
Snooky and Honey Bear have lots of adventures and troubles...
Genre
anthropomorphic-funny animals; children; fantasy-supernatural
Characters
Snooky; Honey Bear; Fairy Barker
Synopsis
Little girl Snooky and her friend Honey Bear are whisked off to the amusement park in the sun when wind catches their umbrella. After a fun day they return to earth in time for a Coney Island hot dog.

Toby is a house byline for this feature and may or may not refer to an actual person.

First Line of Dialogue or Text
The Earth is shaken by the proximity of a mysterious planet...
Genre
science fiction
Characters
Rick Evans; Stringbean; Professor Astra; Professor Brun; Professor White; Professor Jason; Globo
Synopsis
Scientists inform Rick that a "robber planet" is approaching and its gravitational pull will rob the Earth of "its oceans, forests, soil, in short everything that make it habitable." Rick, accompanied by his pal Stringbean and "very brilliant scientist" Astra visit the robber planet and are captured by Globo and his subjects. Rick and the others escape and destroy Globo's infernal machine, saving Earth and blowing up the robber planet.

Stan Ford was a house byline for this feature.

Rick Evans meets Professor Astra in this story but they were already acquainted in the story in Green Mask Comics #10.