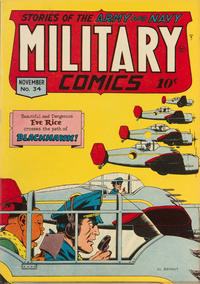 Genre
adventure; war
Characters
Blackhawk; Andre; Olaf; Chop-Chop; Hendrickson; Chuck; Stanislaus; Eve Rice (first appearance); the Japanese (villains)
Synopsis
Eve Rice, a talented photographer/aviatrix who had been following the exploits of the Blackhawks, helps the group fight off a Japanese attack. Her admiration was twisted, however, as she actually tips off the Japanese to the Blackhawks' location just so that she could get some good photos.

[The Rescue of Sgt. Martin] (Table of Contents: 3)

Genre
adventure; war
Characters
The Sniper; Sgt. Judy Martin, WAF (introduction)
Synopsis
The Sniper frees an American WAF, and, as she sails away, the Sniper tells his comrade, "Never mind how I feel! The war's still going on and we're still helping to win it!"

First Line of Dialogue or Text
There goes the chief's new queen!
Genre
humor
Characters
Johnny Doughboy; Gilda Glamma
Synopsis
Movie star Gilda visits the troops on a Pacific island. She doesn't measure up to the natives' standards of beauty, however.

[The Sultan of the Desert] (Table of Contents: 5)

Art is consistent with Stein’s signed Private Dogtag art from the previous issue. Art was previously attributed to Bart Tumey.

The Mystic Element (Table of Contents: 6)

The Secret of Fan-Tan (Table of Contents: 7)