Marvel [standalone or inside vertical box]
Printer
Printed in the U.S.A.

A new role for Heather...a decision for Snowbird...and Shaman meets the ultimate menace! (Table of Contents) 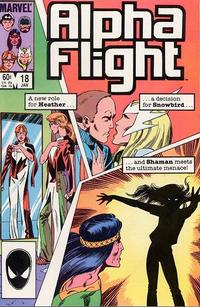 How Long Will a Man Lie in the Earth 'Ere He Rot? (Table of Contents: 1)

Two spellings are used for the names of the characters of Emily and Lucas: ‘Stang’ (pp. 6, 9 and 22, then in Alpha Flight # 19), and ‘Strang’ (pp. 16, 18). Given the frequency of use of ‘Stang,’ it seems that the spelling of ‘Strang’ is incorrect and constitutes a scripting error.