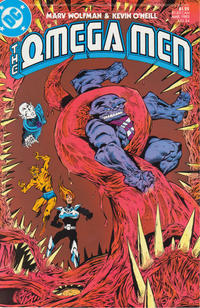 The Maze (Table of Contents: 3)

Letter column in Omega Men #24 states that this is a prototype version of the Psions, created by Marv Wolfman, that were an integral part of the Omega Men series.

The names of the two aliens, Spafon and Squatront, are also the names of two famous EC fanzines.