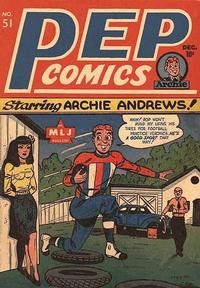 The Commando (Table of Contents: 1)

Orphans of Death (Table of Contents: 2)

In 1943-46, Novick only pencilled the Shield stories. Inking is very similar to Shumaker's signed Black Hood story in #49.

This is not the style of Novick, seems more like Vigoda when looking at some big noses and inking of muscles and ears. Also the lack of details in backgrounds, but his cartoon faces and figures are missing. Uncertain.

Originally credited Clem Gretter, but he signes his work Gretter, as in US Marines Comics #1, and style is different. This here is identical to several signed Clem/Pen stories, and has the typical long Weisbecker faces with angular chin.

Jughead The Gigolo (Table of Contents: 6)

Genre
teen
Characters
Archie Andrews; Jughead Jones
Synopsis
When Jughead vists Archie, Archie demonstrates his burglar trap. Then, Jughead tells him that he has a date and wants Archie and Veronica to come along. When Archie gets home late, he uses the cellar door and gets caught in his own trap.
Reprints