No ads in this comic. On-sale date from DC Releases #11. 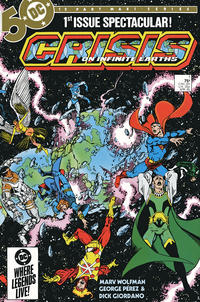 Job Number
L-1913
First Line of Dialogue or Text
"My theory is, both Earths were created at the same time in two quite similar universes!..."
Genre
non-fiction
Characters
Pariah

Describes the beginnings of the DC Multiverse and this series. Located on the inside front and inside back covers.

The "First Line of Dialogue or Text" quotation is from Flash #123 (September 1961) as Barry Allen speaks to Jay Garrick.

The Summoning! (Table of Contents: 2)