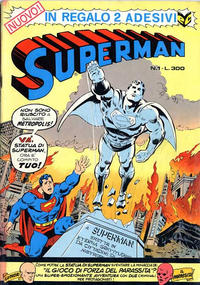 Job Number
S-1879
Genre
supereroe (superhero)
Characters
Lex Luthor (villain); Parasite (villain); Superman; Clark Kent; Josh Coyle; Steve Lombard; Brainiac (statue); Mr. Mxyzptlk (statue); Terra-Man (statue); Superman Museum
Synopsis
At the Superman Museum, The Parasite intentionally bumps into Lex Luthor in order to steal his voice and command ability. When Superman is knocked down by Luthor's weapons under the control of The Parasite, Luthor transfers Superman's life-force into the Superman statue made from an asteroid that sits outside the museum. The statue knocks The Parasite out of his hovercraft and catches him. When the Parasite tries to drain the powers of the statue, The Parasite's power is drained instead.
Reprints

Characters
Superman (quoted);Batman (quoted)
Synopsis
Short article from the publisher presenting the return of the main DC characters in Italy after going unpublished for a few years.

Job Number
S-1888
Genre
supereroe (superhero)
Characters
unnamed gang of art thieves (villains); Superman; Clark Kent; Krypto; Lois Lane; Chelsea the Dog
Synopsis
While Superman and Lois enjoy a date, Krypto, who has lost his memories, encounters a dog named Chelsea. When Lois passes out, Superman takes her to a hospital and is spied by Krypto, whose memories flood back. Superman and Krypto trace the gas that knocked out Lois to a gang of thieves using blue smoke-bombs to cover their robberies. When they put a stop to the gang, Lois reaffirms her love for Superman, but Chelsea is not as comfortable with a super-powered suitor.
Reprints