The train as depicted on the cover is not a subway train, but the story inside is about the New York City Subway System. 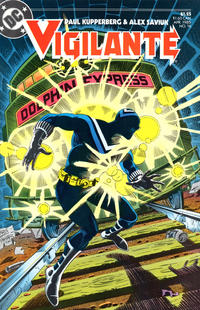 Under the Sidewalks of New York (Table of Contents: 1)

Job Number
I-134
First Line of Dialogue or Text
"Perhaps his years of drug addiction had wasted away Billie's body until he weighed no more than 90 pounds...
Feature Logo

The D Train is an actual line of the New York City Subway System, stretching from The Bronx to Coney Island in Brooklyn - and traveling along Sixth Avenue in Manhattan. It is depicted accurately for the time. Stops along this line include Yankee Stadium and Rockefeller Center.

New York locations mentioned in this story include: Washington Square Park and its great arch, Sixth Avenue (also known at the time as "Avenue of the Americas"), Manhattan Bridge, East River, and Grand Street.

Paul Kupperberg begins his lengthy writing stint on The Vigilante with this issue. He is credited both on the front cover and in the story's credits box. Previous indexer had Marv Wolfman as writer of this story,