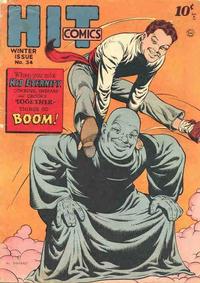 [The Reformation of Rita Rowley] (Table of Contents: 1)

Artist revision from Mac Raboy to ? by Craig Delich 2013-5-13. Editor Busy Arnold, in an interview on June 30, 1972, states "Mac Raboy never did any work for Quality Comics".
Credits from Jim Vadeboncouer.

[The Happiness Pills] (Table of Contents: 2)

[Strangeness On a Train] (Table of Contents: 5)

The Ghost of Villa Vane (Table of Contents: 6)

Born At Dunkirk (Table of Contents: 7)

[Scourge of the Skyscraper] (Table of Contents: 8)

Genre
superhero
Characters
The Great Defender [Stormy Foster]; Ah Choo; Ah Mee
Synopsis
In order to impress his new found heart throb, Ah Mee, Ah Choo decides to take some of Stormy's super-vitamins. When the lad's exploits make the newspaper headlines, Ah Mee is interested, but it is too late as many girls are after Ah Choo. To prevent any more outings by the "Chinese Great Defender", Stormy vows to keep his vitamins better hidden.

[Prince of the Buztecs] (Table of Contents: 9)