On-sale date from Amazing Heroes #66.
This issue has variants: 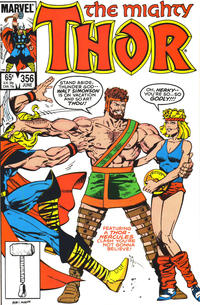 The Power and the Pride (Table of Contents: 1)

Genre
fantasy-supernatural; superhero
Characters
Thor; Hercules; Jarvis; Matthew Linden (introduction); Tony and his gang (introduction)
Synopsis
Hercules tries to resolve a dispute between some boys as to who is stronger, he or Thor; embellishment ensues.
Reprints

Thor only appears in a phony story told by Hercules.