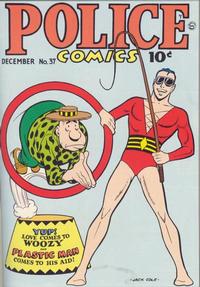 First Line of Dialogue or Text
Deer son Dewey--
Genre
humor
Characters
Dewey Drip; Ma Drip; Awful Drip
Synopsis
Dewey's tough cousin Awful Drip tries to join up, but once his bushy beard has been removed, the Army rejects him due to his "homely an' scared" face.

[The Coming of Candy O'Connor] (Table of Contents: 5)

[Diamonds and the Volcano] (Table of Contents: 6)

Gustavson returns as scripter of this feature with this story according to Jim Amash in The Quality Companion.

Case of the Sun Cabinet (Table of Contents: 7)

[The Antoinette Heirloom] (Table of Contents: 8)