There is no letters column this issue.
On-sale date from Amazing Heroes #67.
This issue has variants: 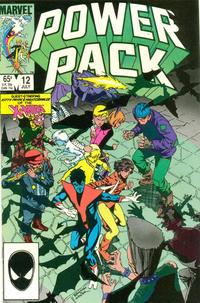