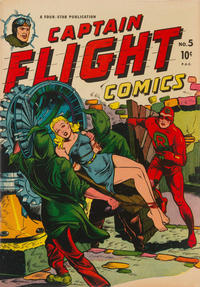 The stories with the byline Frank Stevens vary in artwork in this comic book, so it has to be several artists at work. Compare artwork with Fiction House Fight #31.

Jerry Bails' Who's Who has Fist E. Cuffs as a pen name for Schwab.

First Line of Dialogue or Text
Yes, Sir, I am Jim Carson. What can I do for you?
Genre
spy
Characters
Secret Agent 2B-3; Jim Carson
Synopsis
A man is offering Agent 2B-3 one million dollars for a new fighting aircraft.

Genre
detective-mystery
Characters
Cornelius Tanner; Mrs. Cornelius Tanner; Undertaker
Synopsis
A wife gets more than she bargained for after attempting to poison her husband and have him cremated.

Genre
humor
Characters
Bonzo
Synopsis
Bonzo brings his wilted flower to a man playing the clarinet. Saliva from the clarinet refreshes the flower.

The Case of the Limping Nazi (Table of Contents: 8)

The word "satellite" is spelled incorrectly in the story.
The faces give away Kiefer as the artist.

First Line of Dialogue or Text
One thousand feet below the heaving sea into the fathomless pit of mystery
Genre
adventure
Characters
Dawson; Queen of the Weed People
Synopsis
A creature with clammy green fingers pulls ships under the sea and Dawson is sent to investigate.