The eyebrows and lower lips are so similar to the cover of #9, and to a signed Johnny Canuck story in the Canadian "Dime Comics" that this could be the same artist. 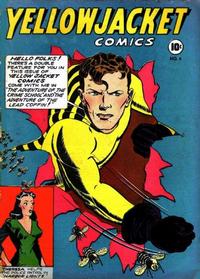 First Line of Dialogue or Text
When an educated crime exponent turns teacher and passes his evil learnings on to his more illiterate colleagues and expects his pupils to reward him with various loot [...]
Genre
superhero
Characters
Yellowjacket [Vince Harley]; Topaz (villain); Bugs Dugan (villain); Fingers Fips (villain)
Synopsis
Just released from prison, Topaz starts a school and turns teacher to pass along his evil learnings to his more illiterate colleagues, expecting his students to reward him with the fruits of their felonious crimes.
Reprints

Title taken from the cover.

This is the only story that has some of Gattuso's gaping faces, and many faces also look like Battefield's work.

Out of Commission (Table of Contents: 3)

The Fall of the House of Usher (Table of Contents: 6)

Genre
horror-suspense
Characters
Edgar Allan Poe; Roderick Usher; Madelaine Usher
Synopsis
Poe visits the gloomy house of Usher and wonders what has come over his old friend, who roams the house like a madman.

The art here is similar to Schrotter's Diana the Huntress stories.

This is by DeLay, who can be recognized by the "slow" movement of the rather short figures. Also faces and the layout style more like old book illustrations. Originally credited to William M. Allison. Allison has more wide open eyes, like in his Poe story in #1.

First Line of Dialogue or Text
Gun flashes pierced the midnight gloom beyond Graves Light, silent sentinel at the stormy gateway to Boston --
Genre
adventure
Characters
Steve Hardesty; Jake Burns; Theresa Burns
Synopsis
Theresa overhears her brother and other smugglers planning their move to grab cocaine from a smuggler ship moored in the harbor, and she informs Steve of the harbor police.

The pouchy eyes, often out of focus with a marked line down the cheek in sideview are certain signs of Palais. Also the movement of hands.