On-sale date from Amazing Heroes #69.
This issue has variants: 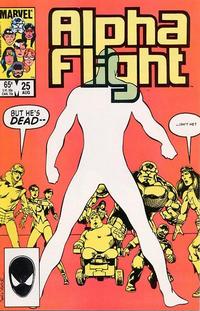 First Line of Dialogue or Text
Well, Northstar?
Genre
superhero
Characters
Alpha Flight [Heather McNeil Hudson; Shaman; Puck; Aurora; Northstar; Talisman [Elizabeth Twoyoungmen]; Box [Dr. Walter Langkowski]; Roger Bochs]; Guardian [MX39147; Delphine Courtney, also as James MacDonald Hudson]; Caliber [Quinn Pullman]
Synopsis
As Alpha Flight is grilling Northstar about his old life as a terrorist, they get the news that Guardian, their dead leader, is battling Caliber. Talisman helps Guardian defeat his foe and "Mac" explains to his teammates and his wife how he survived the explosion of his suit during a battle with Omega Flight (in Alpha Flight #12): He was discovered by aliens who rebuilt him by integrating him with his suit. Walter tries out his new Box body.
Reprints

The writer Bill Mantlo is credited for ‘creative kibbitzing.’ It is probable that Mantlo, at the time writer of Incredible Hulk series, slightly contributed to the writing of the script, for the future of the Box/Langkowski connection (see Alpha Flight #28, November 1985).