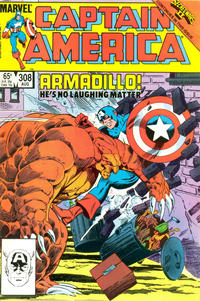 The Body in Question (Table of Contents: 1)

Genre
superhero
Characters
Captain America [Steve Rogers]; GUESTS: Hawkeye; Mockingbird; Beyonder; Bonita Rodriguez (introduction; Armadillo's wife); VILLAINS: Armadillo (introduction) [Antonio Rodriguez]; Dr. Karl Malus; Goliath [Erik Josten]; Serpent Squad [Black Mamba; Sidewinder; Anaconda; Death Adder]
Synopsis
Cap heads to the WCA compound to borrow a quinjet to get him back home. Cap repels an invader trying to break into Avengers HQ, the armored Armadillo. 'Dillo tells him a tragic story of a dying wife and Cap agrees to help. Cap follows him back to the lair of Dr. Malus and confronts the evil doc. With the life of 'Dillo's wife hanging in the balance, Cap agrees to leave Malus to his work but warns Armadillo to keep a close eye on him. The Beyonder has watched this whole adventure and decides to take the form of Steve Rogers for his sojurn on Earth. The Serpent Society begins to reform.
Reprints

The Adventures of Quik Bunny (Table of Contents: 2) (Expand) /