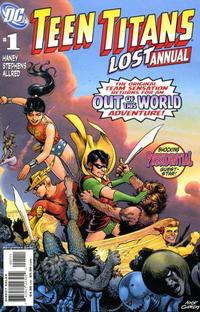 President Kennedy Has Been Kidnapped! (Table of Contents: 1)

Genre
superhero
Characters
Teen Titans [Wonder Girl [Donna Troy]; Kid Flash [Wally West]; Aqualad [Garth]; Speedy [Roy Harper]; Robin [Dick Grayson]]; John F. Kennedy; Batgirl [Barbara Gordon] (cameo); Batman [Bruce Wayne] (cameo); Metamorpho (cameo); Gwynnet; Zora
Synopsis
Robin discovers that President Kennedy has been replaced with an alien shape-shifter from Ullustro, so the Titans head there to find out why. There, the Titans find two races locked in eternal war and President Kennedy brainwashed into being the general of one of the sides. In order to jar his memory, Robin re-creates the situation President Kennedy faced on PT 109 in World War II. Cured, President Kennedy starts peace talks before they all head home. But when he learns that the alien taking his place was shot, the real President Kennedy returns to Ullustro to complete the peace talks.
Reprints

Gaspar Saladino's first name is misspelled as Gasper in the credits. There are souvenirs from the Teen Titans' early cases displayed in their headquarters, even though all of the stories from which they come -- in fact all Teen Titans stories -- were published after the death of John F. Kennedy in 1963. Batgirl's appearance is also anachronistic, as she would not make her first appearance until 1966. There are monitors in the headquarters displaying the Justice League of America, Doom Patrol, and Challengers of the Unknown. The appearance of the Ullustrians is modelled on the early Beatles.

A variety of sketches, both team shots, and solo studies.