Though credited as the editor, Julius Schwartz didn't actually edit the main contents as they were done in secret to celebrate his 70th birthday. Via Facebook, Bob Rozakis confirmed he "spoke with Maggin about the story before he wrote it, coordinated moving the script and art through the system and into production," acting as the de facto editor for most of the issue's contents.

On-sale date from DC Releases #16.
This issue has variants:

Via Facebook, Bob Rozakis relayed that he believed Giordano penciled and inked the cover, though he couldn't say with absolute certainty. Letters credit from Todd Klein. 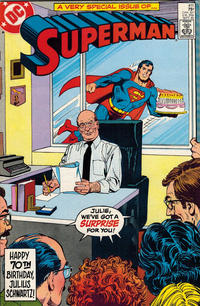 "Cover" of the "Special MASK Preview." Letters credit from http://kleinletters.com/.

This is a preview insert in this comic.