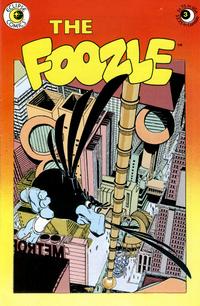 Originally written as a DC Comics Presents story starring Superman and the Creeper. The story eventually appeared, with art by Keith Giffen, in DC Comics Presents (1978 Series) #88.
From Steven Englehart's web site: "But before I turned it into Julie Schwartz, a good editor, I discovered that the editor of another title had offered me more money than he was supposed to, and management wouldn't come through even though I'd done the job, so I took all my stories and walked. I had no plan - what was I going to do with DC-specific stories if I didn't sell them to DC? - but that very afternoon, Jan and Dean Mullaney bought them to start their new magazine line (for the price DC had promised). So Marshall Rogers, who was going to draw the Superman-Creeper story, sat down and riffed on it. He turned Superman into a little girl and the Creeper into the Foozle, and I rewrote dialogue as needed. Marshall later spun the Foozle into his own series, which he wrote himself, and since it was pretty much his creation, I renounced my rights to him...er, it..."
Editor's note reads "Here, at last, is a full colour reprint of the first, classic b&w Foozle story by Steve Englehart and Marshall Rogers. According to Marshall, this episode takes place before Klonsbon met the Cap'n, so Little Quick isn't in this story."