Mark Carlson-Ghost maintains that the art for this cover was by Mac Raboy (not Guinta) in his massive article in Alter Ego (Tomorrows, 1999 series) #164 (May 2020), page 37. Upon close inspection of the cover, John Guinta's signature is no where to be seen, as previous credit stated. Art credits revised by Craig Delich. 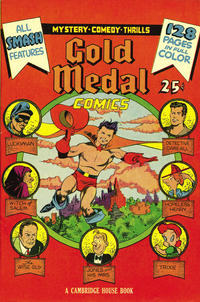 The Vanishing Boy! (Table of Contents: 2)

Mark Carlson-Ghost maintains that the art for this story was by Mac Raboy (not Bob Fujitani) in his massive article in Alter Ego (Tomorrows, 1999 series) #164 (May 2020), page 37. Art credits revised by Craig Delich.

First Line of Dialogue or Text
Wanted! Man to take care of curtain
Genre
humor
Characters
Bill Hilly
Synopsis
Bill tries to get a job at a theater.

The Witch of Salem (Table of Contents: 7)

Genre
drama; historical
Characters
Bridewell; Penley
Synopsis
A woman accused of being a witch is sentenced to death.

First Line of Dialogue or Text
This is the story of a little white mouse...
Genre
anthropomorphic-funny animals
Characters
Whitie; Bernie; Carrie; Wright
Synopsis
Whitie finds a magic crown and a life-giving potion and goes on an adventure.

The logo spells his name Whitey, but the story calls him Whitie.

The Terror of the Temple! (Table of Contents: 9)

Information on James Doolittle's plane, the first flight by kite, the Douglass C-54, a plane riddled with over 2000 shell and bullet holes and the first transpolar flight to Alaska.

The Man with the Mirror Eyes! (Table of Contents: 11)

First Line of Dialogue or Text
Somebody should have told this guy about Lincoln freeing the slaves!
Genre
humor
Characters
Jones; Mrs. Jones; Mrs. Snoop
Synopsis
Mrs. Jones bakes pies for a charity.

Characters
Becket; Farrell; Jose
Synopsis
A prisoner is put in a cell on a small island.

The Perfume Murder (Table of Contents: 14)

First Line of Dialogue or Text
Like most really strong men, Dennis Denton hates to have to use his strength!
Genre
detective-mystery
Characters
Dennis Denton; Cheryl; The Jolly Roger
Synopsis
The Jolly Roger robs a bank and throws away the money.

Money from Nowhere! (Table of Contents: 20)

Info on an air torpedo, the first flying bomb, the grasshopper artillery, Lou Kirn and Frank Kurtz, and the North American Mustang plane.

First Line of Dialogue or Text
Since I gave my dog to the army, I'll have to use you to retrieve the ducks I shot down!
Genre
humor
Characters
Screwy
Synopsis
Screwy retrieves a hunter's shot duck.

First Line of Dialogue or Text
It's all right when Luckyman is on your side... but his good luck is all bad luck for crime and criminals... that's what Joltin' Joe didn't know...
Genre
superhero
Characters
Luckyman [Danny Barr] (introduction); Oliver Barron; Joltin' Joe; Bobo
Synopsis
Luckyman is hired to solve the mystery of some disappearing ships.

Only appearance of Luckyman.