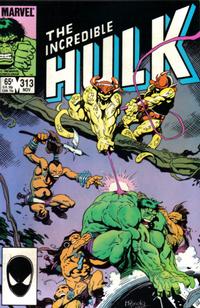 Genre
superhero
Characters
Hulk [Bruce Banner]; Walter Langkowski [Sasquatch]; Alpha Flight [Heather Hudson; Shaman; Puck; Aurora; Northstar; Box [Roger Bochs]; Madison Jeffries] (cameo); Doctor Strange (cameo flashback); Nightmare (cameo flashback); Snowbird (cameo flashback)
Synopsis
Hulk is trying to do away with himself in the dimensional crossroads where he is trapped when he is tagged in the back by a mysterious force. Unable to shake the line, the Hulk's body is possessed by Walter Langkowski who explains that Alpha Flight is trying to find him a new body in another dimension. The displaced spirit of Bruce Banner agrees to let Walter have his body but, touched by the sacrifice, Walter refuses and leaves the Hulk. Banner is sucked into the Hulk's body once again and his body is pulled back to Earth by Alpha Flight.
Reprints

Continued in ALPHA FLIGHT #29; The creative teams for both Alpha Flight and Hulk make a permanent switch next issue.