The Strange Death of Captain America (Table of Contents)

Tom Sutton paid tribute to this cover in his story "Superhero!" in Eerie #32 (Warren, March 1971); the same panel also appeared on that issue's cover. 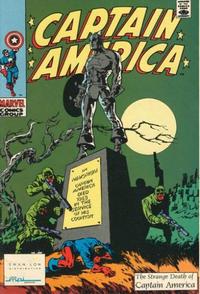 The Strange Death of Captain America (Table of Contents: 1)

Steranko plotted this story, with Stan Lee writing the dialogue as the artist confirmed in Fantastic Fanzine # 10, 1970. According to Steranko he lettered and inked the centerspread. Part 3 of 3.

The climax of this story in part pays tribute to "Spy Ambush" from Captain America Comics #10 (January 1942). Nick Fury presumably appears between issues #11-12 of SHIELD. HYDRA returned to battle SHIELD this month in Nick Fury #12 (May 1969). Rick Jones would not remain the new Bucky for long. Roy Thomas & Gil Kane soon had Rick join with Captain Mar-Vell in Captain Marvel #17 (October 1969). Following the cancellation of Nick Fury, Agent of SHIELD the characters appeared frequently in Captain America. In the wake of Baron Strucker's demise most HYDRA stories involved regional factions rather than one centralized organization. Although she was apparently killed at the end of this episode Madame Hydra reappeared in Captain America #180 (December 1974) under the new name the Viper.