The Man from Two Worlds! (Table of Contents) 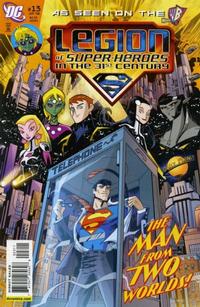 Back in Metropolis (Table of Contents: 1)

The Lex-O-Skeleton 3000, which resembles Lex' traditional battle suit, is displayed at Shuster Airfield, named after Superman co-creator Joe Shuster. Lois mentions that a vigilante has appeared in Gotham City soon after the first appearance of Superman.