•Indicia title is "ROY ROGERS COMICS, No. 86." Code number is ROY R. 86-4510. Copyright 1945 by Roy Rogers.
•The on-sale date is the date of publication as per the 1945 Copyright Entries.
•There is no cover-date. A cover-date (month) was a periodical's pull-date alerting retailers when to remove that issue of the periodical from the stands in order to make room for the next issue which would have already shipped. In this case, the next Roy Rogers Four Color did not ship until three and a half months, December 28, 1945; so, this issue's cover-date/pull-date (had it had one) would have been January (1946). In the past, before Copyright Entries data were readily available, and cover-dates were misunderstood to be month-of-sale dates, archivists of Dell Comics, when confounded by the absence of a cover-date, hacked Western Printing's issue-code and substituted its coded-date for the absent cover-date/pull-date. But that issue-code generally revealed only the first full month the issue was intended to be on-sale. For example, a quarterly that hit the stands (let's say) mid-December and whose next issue wouldn't come out til the Ides of March might have had a cover-date/pull-date of April but its issue-code would have been January --- a three-months' discrepancy. That flawed practice, having assumed the status of venerable tradition, persists today, 2018 September.

[Roy and Trigger] (Table of Contents) 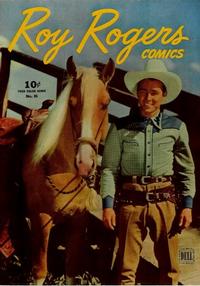 [Portrait of Roy] (Table of Contents: 1)

Inside back cover; black, tan, and white.