On-sale date from DC Releases #21.
This issue has variants: 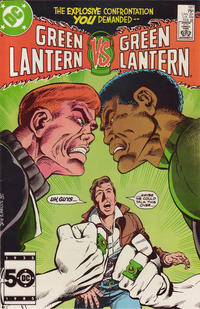 Stewart vs Gardner. Vs the Shark, with a host of other villains (Hector Hammond, Sonar, Goldface, others) as Guy Gardner recruits them to help in the Crisis. Continued next issue. Also not billed as Crisis crossover, although it does mention it in the issue.

Glow in the Dark Solar Ball (Table of Contents: 3) (Expand) /

In the Shadowy Depths of Atlantis His Life Will Change Forever. (Table of Contents: 4) (Expand) /

Subscribe Now for a Fifty-Year Bonus! (Table of Contents: 8) (Expand) /

Synopsis
Sal discusses DC's Talent Program of the past two years with a comment by Dick.

Join the Mask Team and Discover the Illusion. (Table of Contents: 12) (Expand) /