The on sale date is from the publication date as reported to the U.S. Copyright Office in the Catalog of Copyright Entries, Part 2, Periodicals, New Series, Volume 40, January-December 1945, Numbers 1-4. Class B periodical. Copyright registration #B 653420. 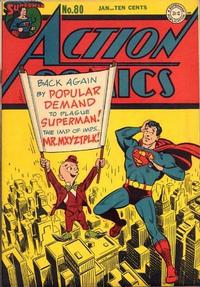 Genre
superhero
Characters
Superman [Clark Kent]; Lois Lane; Perry White; Mr. Mxyztplk
Synopsis
When unusual and weird things begin affecting Clark Kent, there is only one answer for it: that imp from another dimension has returned, and that means more headaches for the Man of Tomorrow!
Reprints

The Riddle of the Reservoir! (Table of Contents: 5)

The story takes place in a city setting, not the jungle.

The Pillager of the Parthenon! (Table of Contents: 9)

Escape by Night (Table of Contents: 12)

Second page in inside back cover.

The Hair That Wasn't There! (Table of Contents: 13)

Art credits by Jerry Bails. Alvin Schwartz script credit removed by Craig Delich. According to the Who's Who, Schwartz wrote this strip from 1946-48.