Art mis-credited to Cliff Young in the Millennium Edition reprint. Cover blurb indicates Dover and Clover are featured inside, but Superboy is there instead. 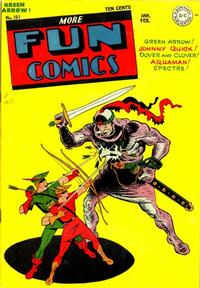 Formula for Doom (Table of Contents: 3)

Orphans of the Sea! (Table of Contents: 5)

Genre
superhero
Characters
Aquaman; Pete (a guard); Mr. Scatterbee; Mr. Bingley (villain)
Synopsis
Aquaman helps to end the false dealings of a pair of thugs who are selling seaside homes on eroding beaches to unwary investors. Pete formerly a guard at the old Aquarium, still takes care of his sea-going friends, even though they're been released back into the ocean. But the thugs think his sea creature buddies are lowering the value on their beachfront property.
Reprints

[The Origin of Superboy] (Table of Contents: 7)

Genre
superhero
Characters
Superboy [Clark Kent] (origin); Jor-El; Lara; Per-Ry (citizen of Krypton); Ma Kent; Pa Kent
Synopsis
Master scientist Jor-El is convinced that Krypton is about to explode, and when the Supreme Council refuses to believe him, the scientist constructs a spaceship capable of taking his infant son to the Earth, where he'll have tremendous powers.
Reprints
Keywords
Krypton

Story does not take place in Smallville. Clark Kent does not wear glasses. Superboy only appears in the last panel. No Siegel and Shuster by-line. Ma and Pa are just referred to in the story as the Kents.

A Personal Reason (Table of Contents: 8)

Genre
crime
Characters
Corporal Jimmy Perone; Pete Perone (Jimmy's brother, death); Mrs. Perone (Jimmy & Pete's mother); Santo Camarda (villain, Mayor of Casilione)
Synopsis
Jimmy Perone had seen Camarda murder his brother years back in the town of Casilione and swore revenge. Now, with the war on, Jimmy's unit returns to capture the town back from the Germans, and discovers that Camarda is the town's Mayor.
Reprints

First page appears between Superboy and Johnny Quick stories; second page appears on the inside back cover and is NOT reprinted in the Millennium Edition.

An Investment in Happiness! (Table of Contents: 9)

The Unsafe Safe! (Table of Contents: 11)

Genre
superhero
Characters
The Spectre [Jim Corrigan]; Percival Popp; un-named jeweler; Ruby Diller mob (villains)
Synopsis
Percival is used by jewel thieves to complete a heist of gems. After the crooks spill their own "gems" in a jewelry store, Percy offers to sort them out. He takes them all home, where the gang follows him to complete their robbery.
Reprints
Keywords
magic; occult