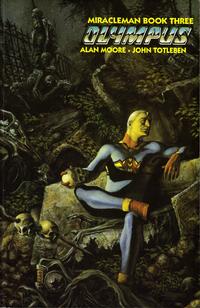 Mikal Gilmore is a journalist who profiled Frank Miller, Alan Moore, and other comic-book authors for Rolling Stone magazine in the 1980s and early 1990s.

The credits for this story are listed as they appeared in their original publication in Miracleman (1985 series) #16. They were put on the final story page. They were replaced with credits for the entire book in this edition.