On-sale date from DC Releases #23.
This issue has variants: 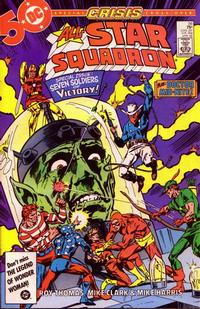 Packs of Fun for Everyone! (Table of Contents: 1) (Expand) /

The Sinister Secret of the Sixth Sense! (Table of Contents: 2)

Become a Published Author in 6 Easy Steps with the PlayWriter Series (Table of Contents: 3) (Expand) /

Discusses Secret Origins (DC, 1986 series) #1. Shares page with a Statement of Ownership and an advertisement for Infinity, Inc. (DC, 1984 series).

Statement of Ownership, Management and Circulation (Table of Contents: 11)