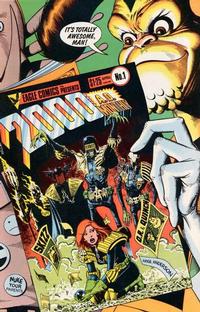 Judge Anderson is a member of the psi-judge branch, and her irreverent attitude (playing yin to Dredd's yang) made her an immediate fan favorite. She was introduced simultaneously with Judge Death and gave her life to end his menace. This being comics, both recovered. Following two self-contained stories in the 1984 and 1985 Annuals, this was her first solo serial. Part 1 of 6

Picking up where the 2000 A.D. Monthly miniseries left off, these four issues give us the remaining Moore stories (except the first--see issue 12 of the ongoing series for that). Part 1 of 3

Skizz was Alan Moore's first serial. It's a seemingly typical story about an alien who crash-lands on Earth, is befriended by a teenage girl, and is hunted by Evil Government People (Moore says he wrote it before ET). Moore's gift for characterization is what makes this feature special--the human supporting cast is arguably more interesting than the alien. Part 1 of 8