On-sale date from Amazing Heroes #93.
This issue has variants: 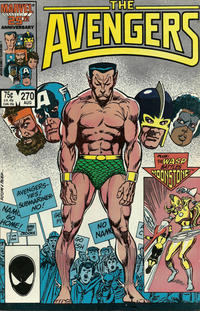 Wild in the Streets! (Table of Contents: 1)

Genre
superhero
Characters
Avengers [Black Knight [Dane Whitman]; Captain America [Steve Rogers]; Captain Marvel [Monica Rambeau]; Hercules; Namor the Sub-Mariner; Wasp]; Byrrah; Derek Freeman; Edwin Jarvis; Moonstone [Dr. Karla Sofen] (villain); Mr. Costello; Absorbing Man (villain); Titania (villain)
Synopsis
With public opinion split on whether the Sub-Mariner should have been inducted into the Avengers, Moonstone attempts to trick the protesters into rioting. Captain Marvel helps save FBI agent Derek Freeman from a helicopter crash caused by Moonstone. The Avengers capture Moonstone but unwittingly hand her over to the Absorbing Man and Titania who are disguised as New York police. Namor is sued for $2 billion by a group of insurance investors and he leaves to save Marrina from Attuma who has become ruler of Atlantis.
Reprints