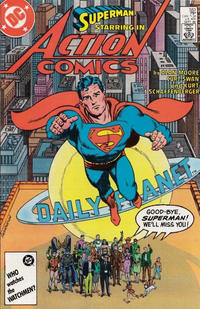 Superman in Action (Table of Contents: 1)

The history of Superman in Action Comics.

Whatever Happened to the Man of Tomorrow? (Table of Contents: 2)

Genre
superhero
Characters
Superman [Jordan Elliot; also as Nightwing (in photo)]; Lois Lane Elliot; Tim Crane; Lana Lang; Jimmy Olsen [also as Elastic Lad; also as Flamebird (in photo)]; Perry White; Alice White; Krypto; Brainiac; Lex Luthor; Kryptonite Man; Legion of Super-Villains [Cosmic King; Lightning Lord; Saturn Queen]; Captain Marvel [Billy Batson]; Vartox; Superwoman [Kristin Wells]; Robin [Jason Todd]; Batman [Bruce Wayne]; Wonder Woman [Diana Prince]; Martian Manhunter; Green Arrow [Oliver Queen]; Hawkman [Katar Hol]; Mr. Mxyzptlk; Jonathan Elliot
Synopsis
Lois continues to relate how when Superman was holed up in the Fortress with his closest friends, being attacked by Brainiac (having taken over Luthor's body), the Kryptonite Man, and the Legion of Super-Villains, he realized who the mastermind behind it all was, and called on Mr. Mxyzptlk to show himself. Just as Superman sent Mxyzptlk into the Phantom Zone, Mxy fled to his own dimension, tearing himself apart. Having taken a life, Superman exposed himself to gold kryptonite and retired. The interview over, Lois, her husband Jordy, and their infant son Jonathan settle in for a quiet evening.
Reprints