On-sale date from DC Releases #28.
This issue has variants:

The Amazing Origin of Liberty Belle! (Table of Contents) 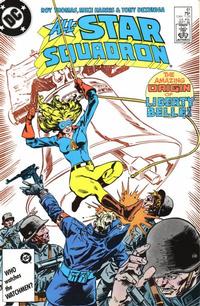 The Origin of Liberty Belle (Table of Contents: 1)

Based on story in Boy Commandos (DC, 1942 series) #1. Beginning a "special new series," Tales of the All-Star Squadron. Some are origin stories that would have eventually been printed in Secret Origins (DC, 1986 series).